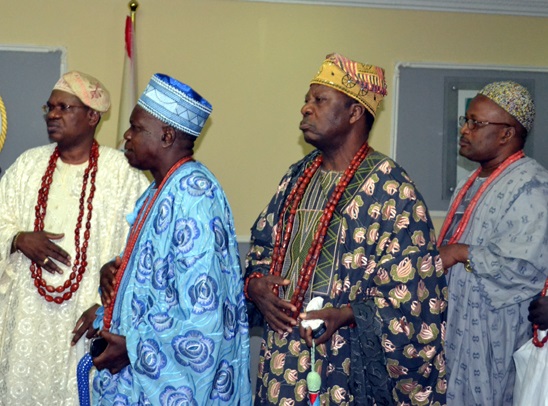 The Ekiti State Council of Traditional Rulers has denied the existence of bad blood between it and Governor Ayodele Fayose over his feud with the suspended Secretary of the Peoples Democratic Party (PDP), Dr. Tope Aluko.

Mr. Aluko over two weeks ago went on television to allege that the June 21, 2014 governorship poll in the state was rigged with the active connivance of the Presidency and Nigerian Army.

Arising from an emergency meeting yesterday at their council chambers in Ado Ekiti, the monarchs denied an online publication alleging that Fayose compelled them through his Chief of Staff, Dipo Anisulowo, to write a joint communiqué to condemn Aluko’s damning expose on the Ekiti governorship poll.

According to them, the online publication mentioned the names of specific monarchs described as “the arrowhead of the anti-Governor Fayose stance”.

The report, which has since gone viral on social media, was described by the monarchs as “libelous”.

The council also demanded an immediate retraction of the said publication and a published apology.

The monarchs described the content of the said publication as a “blatant lie, a fabrication arising from the imagination of the writer and a deliberate attempt to smear the image of the traditional rulers”.

The Chairman of the Council and the Ologotun of Ogotun Ekiti, Oba Samuel Oladapo Oyebade, who read the communique issued by the monarchs, admitted that it was true that they met on February 16 but the meeting was not attended by Anisulowo or any government official.

The Ologotun warned that traditional rulers should not be dragged into murky waters of politics under any guise.

“We note that the said online publication names specific traditional rulers as arrowhead of anti-Fayose’s stance.

“Council says unequivocally that the content of that publication was a blatant lie, a fabrication arising from the imagination of the writer.

“It was also a deliberate attempt to smear the image of the traditional rulers and pitch the government and the council against each other.

“It is true that a meeting of traditional rulers was held on February 16 but the meeting was never attended by Mr Dipo Anisulowo or any government official as quoted in the online publication.

“We, therefore, say without mincing words that there is a cordial relationship between the government of Mr Ayodele Fayose and the traditional council. It is therefore our opinion that the publication was meant to embarrass our members.

“Ekiti Council of Obas will not allow the traditional institution to be dragged into the murky water of politics”, Oba Oyebade said.