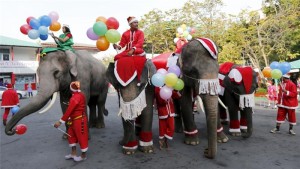 An elephant on the Thai tourist island of Koh Samui trampled a tourist to death in the latest deadly attack by animals used to entertain holiday-makers. The man from the UK was riding on the animal’s back with his daughter on Monday when it suddenly threw them off, police told the AFP news agency.

“We suspect that the hot weather made the elephant angry and that he was not accustomed to his mahout [handler],” said Paiboon Omark, a district police chief. Paiboon said the tourist had a prosthetic leg and was unable to run away from the elephant, which gored and trampled him.  His daughter and the handler, a Myanmar national, were both slightly injured but escaped.

The elephant, named “Golf”, was tranquilised and brought under control, he said.  The male animal was “in musth and was reacting aggressively”, Edwin Wiek, founder of the Wildlife Friends Foundation of Thailand, told the DPA news agency.  Wiek denied local reports that the tourist had been taunting the animal. It was the sixth fatal incident in the last five months involving  bull elephants in musth across Thailand, he said. “Male elephants should not be a part of these treks at all as they  are uncontrollable when they are in heat,” Wiek said.

Thailand has an estimated 4,000 domesticated elephants, many working in the tourism trade, beside some 2,500 wild elephants. In August, an elephant killed his handler with three terrified Chinese tourists still on his back. The tourists survived. Thailand’s use of animals for tourism is under increased scrutiny following a string of scandals and investigations by rights groups.