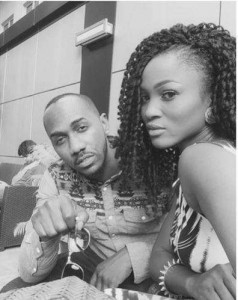 Talented Female rapper Eva Alordiah, has fired back at women who criticized the video of her kissing her TV personality fiancé, Casear.

On Valentine’s Day, Eva and Caesar released a video of them kissing passionately on their joint Instagram account.

Today (February 17) Eva has responded to the women who criticized her video. Read her lengthy response below: –

Quite a number of you do not even have boyfriends and from the tone in your many comments, GuuurrRl!! It is not hard to understand why!

I feel your pain

Because even I have bled from the same vein

But unlike you I didn’t go around pouring hate and the bitter kola taste of an impertinent spirit into every girl who had one, like I would palm oil into a frying pan.

Instead I saw her and wished it were me

I Said to God, I want that too!

And when, after many a great hits and misses with boys, like a learner on a tennis pitch who just can’t quite hit the ball right, I finally met a man who swept the-single-and-searching-rug off my feet..

And made me say Yes I commit

And Lord Oh Lord, every time I see him I know that I gotta Eat!! And so I eat, when I want to sha,

Nor be everytime the thing dey chook me like that.

Other times I am undecided which tempo to go

Like traffic on third mainland bridge at 8.AM from Ikeja

Go – slow…no, stop for a while for no reason, Go fast…Go slow again.

I don’t know how long this feast would last,

But it has been served me like the buffet at an Igbo Wedding reception with Food cooked by Isoko women and I intend to eat and eat and eat for as Long as the Food is in sight.

I pray God blesses you with someone who would make you eat them the F out! Say Amen, say it nauuuu you know you want to

Thanks for letting me eat again. Tonight, the moon had a subtle glow about it. Daalu o?

#evaandcaesar S1 coming to you now! Please Subscribe to ‘evaandcaesar’ on youtube to watch all of our crazy randomness as we both try to figure out how to make a Relationship really work in this 160character texting world we now live in!”

Eva got engaged in spectacular fashion on January 1, 2016 live on TV at the Headies.

The engagement proposal came as big surprise to the rapper who said yes and kissed Caesar on live television.