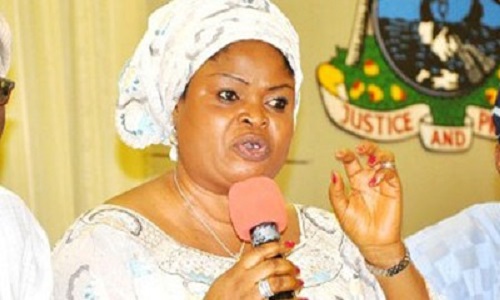 The immediate past deputy governor of Lagos State, Mrs Adejoke Orelope-Adefulire has refuted media reports linking her to an Ikoyi, Lagos property.

In a statement yesterday, she said: “I am not the owner of the property on the said location and neither do I have any link whatsoever with the property.

“The publication was done maliciously and in bad taste; the authors could have simply contacted me or The Ministry of Physical Planning and Urban Development to confirm the veracity of the claim that I am the owner of the building before going ahead to publish it”.

Mrs. Orelope-Adefulire condemned the publications for not getting its facts right, saying: “It is indeed a smack of journalistic laziness that the ownership of a building could be foisted on me simply because its owner named it ‘Adejoke Court’ as if I am the only Adejoke in the world”.

Aside publishing the disclaimer, the ex-deputy governor said that the “false publication” had caused her “undue embarrassment”, adding that she would be taking legal actions.

“I have also instructed my lawyers to commence legal actions against all those involved in the defamation of my hard earned reputation and integrity”, said the statement which she personally signed.