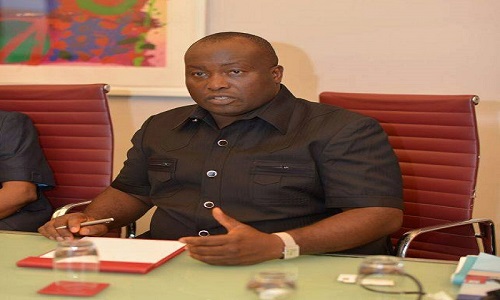 The Managing Director/CEO of Capital Oil and Gas, Ifeanyi Ubah, has decried the continued stay in office of government officials saddled with fiscal responsibilities in the country, saying they ought to have resigned in light of the current economic crisis bedeviling the country.
He also accused the Kemi Adeosun-led Ministry of Finance and the Central Bank of Nigeria of applying only fiscal policies that look good on paper rather than practical ones in the face of economic realities in the country.
It would be recalled that Mr. Ubah had earlier this week made news headlines when he vowed to bring down the naira to N200 to $1 if the federal government would give him the opportunity to become its chief consultant on financial stability.
He also challenged the Nigerian government to seize his asset worth over N500 billion, if he fails.
At the time he made the statement, the Nigerian currency was hovering around N400 to a dollar at the parallel market.
However, speaking as guest on a Raypower FM programme yesterday, the billionaire businessman, blamed Mrs. Adeosun and governor of the CBN, Godwin Emefiele for the current foreign exchange crisis facing the nation.

He faulted the fiscal policy being applied by the Ministry of Finance and the apex bank in dealing with the fiscal challenges experienced in Nigeria.