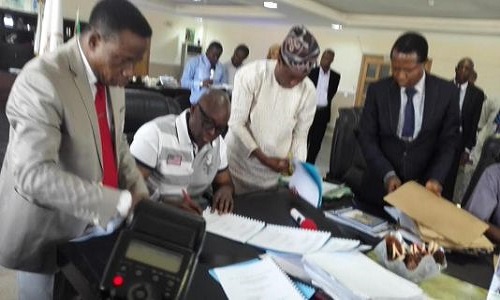 Governor Ayodele Fayose of Ekiti State has approved the immediate disbursement of N236,860,000 as motor vehicle loan to 773 workers in the state’s public service.
The Commissioner for Finance in the state, Toyin Ojo, who made this known in Ado-Ekiti on Monday, said the loan, which ranges from N80,000 to N1.5 million, would be paid in full to the beneficiaries.
The grade levels of the 773 beneficiaries were taken into consideration in approving the loan the commissioner said.
Mr. Ojo also informed applicants who could not meet up with the screening condition of 50 percent of their net pay set by the State government, not to lose hope as they would be considered soon as the condition is met.
He, therefore, advised civil servants who applied to check their names on the list at the state accountant general’s office.
The finance commissioner reiterated the resolve of the Fayose administration to the welfare of workers, promising that another list of beneficiaries of the car loan would be released in due course.