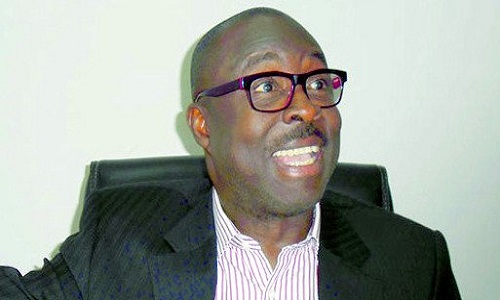 A former governor of Ekiti State, Chief Niyi Adebayo, has accused Governor Ayodele Fayose of making mockery of governance in the state.

Adebayo, who led the ‘Fountain of Knowledge’ state between 1999 and 2003, said two-term Governor Fayose had turned Ekiti into a pariah state.

“I don’t think there is anybody in Nigeria who will say he is happy with what is happening in Ekiti state”, the ex-governor told journalists on Tuesday after a meeting of Ekiti’s All Progressives Congress members, at the national secretariat of the party in Abuja.

“Ekiti is being turned into a pariah state and it is unfortunate that this sort of thing is happening and that is why we who are in the opposition are putting our house in order and we believe that if we all stick together and make sure that the party is in stable state, we will be able to wrestle power back from the current governor (Ayodele Fayose) that is making mockery of our state”.

The APC said in a statement that the Abuja talks was a “reconciliatory meeting” convened by the deputy national chairman (South) of the APC, Segun Oni, who incidentally, is a former governor of Ekiti.

On the ongoing airport project embarked upon by Mr. Fayose in Ekiti state, Mr. Adebayo said, “Frankly speaking, even without paucity of fund, even with the way things were before, it is a surprise that anybody or any reasonable person will say that the priority for Ekiti state is an airport.

“It is definitely not an airport. We have an airport in Akure which is 45 minutes’ drive from our state capital. So building an airport in Ekiti state honestly is not a well taught out project”.

He said the APC had been having issues in the state, but was rallying its members to wrestle power from the Peoples Democratic Party.