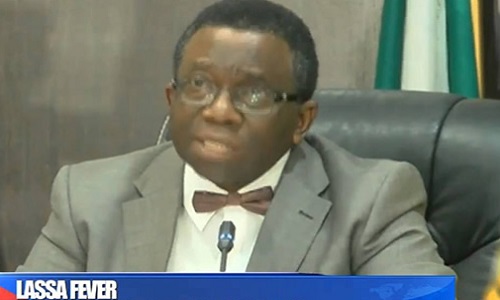 The Minister of Health, Prof. Isaac Adewole has disclosed that the Nigerian government will offer free healthcare to 100 million Nigerians in the next two years under the country’s new health agenda.
Pregnant women across Nigeria will also enjoy access to free antenatal and delivery services, particularly at the primary healthcare level, the minister added.
Mr. Adewole stated this while speaking on a current affairs programme, The Osasu Show, aired weekly on African Independent Television.
In order to achieve that target, the government would revitalise the primary healthcare services and adopt “the universally accepted concept of one primary healthcare centre per political ward”, he added.
The minister further stated that women with uncomplicated pregnancy and those with uncomplicated past will be expected to visit the primary healthcare centre.
“One of the things we want to do under the revitalised PHC programme is that each of these revitalised, reinvigorated PHC will have an industrial borehole so that we can offer water to the people, clean drinkable water.
“There will be solar electricity so we can have the ability to keep our vaccines in safe conditions. We will then use this new reinvigorated primary healthcare centres for the focus of community development nationwide”, Mr. Adewole said.
The primary healthcare facilities, according to the minister, will be managed by nurses, mid-wives and village workers so as to accommodate cultural differences in different parts of Nigeria.
“If we do not (do this), people will not use the facilities”, he stressed.
According to him, “We are not going to import someone from Port Harcourt to work in Sokoto. We are looking at people in the Sokoto environment who speak the language and understand the culture.
“The new model we are operating will also have villager workers who will oscillate between the facilities and the community and we will promote ownership by telling them the facilities are theirs and not for the federal government or state but that it belongs to them as a community”.
For a start, Mr. Adewole said the federal government would deliver 110 primary healthcare centres in the next three months across the country.
“When we flag it off, it is going to be one PHC per day to show Nigerians that we mean business”, he said. “We will surprise everybody!”
The minister said President Muhammadu Buhari’s administration was different from other past administrations in Nigeria.
“We are serving under a leadership that is totally committed to supporting the poor”, he said. “We have an agenda that is entirely pro-poor and as we have mentioned, we will not just make vague promises, we will deliver”.
The minister also said the federal government was planning to change the national health insurance from being voluntary to compulsory and universal, so that the “healthy will care for the sick and the rich will care for the poor”.