A popular brothel known as Akamas located in Choba, Obio/Akpor Local Government Area of Rivers State was among property destroyed in an evening fire outbreak on Thursday. 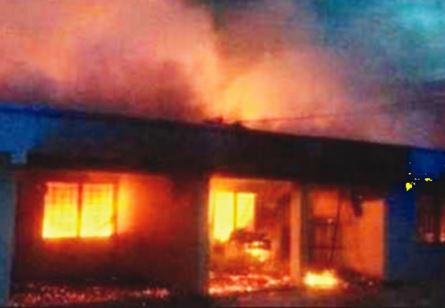 It was gathered that the fire razed the entire brothel, leaving some sex workers and others in the place with no place to stay.

It was also learnt that the inferno was caused by a cooking gas used in the brothel by workers.

Some customers, who were inside the brothel with some prostitutes, were said to have rushed out of the place half Unclad in order to avoid being consumed by the inferno.

The inferno was said to have also affected about three houses close to the brothel as a result of the late arrival of fire fighters to the scene.

Choba, the area where the incident occurred is a host community to the University of Port Harcourt.

An eyewitness said that though no life was lost and no injury was recorded in the fire outbreak, property worth millions of naira were destroyed.

The raging fire, according to another source, destroyed everything in the brothel as no property was saved during the incident,