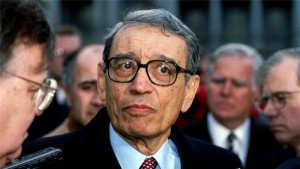 The UN Security Council has announced the death of former UN Secretary-General Boutros Boutros-Ghali, who lived until the age of 93. Venezuela’s UN Ambassador Rafael Ramirez, the current council president, made the announcement at the start of a meeting on Yemen’s humanitarian crisis on Tuesday, before asking members to rise for a moment of silence.

Born in November 14, 1922, in Cairo, Boutros-Ghali studied in the Egyptian capital and Paris and became an academic specialising in international law.

The Egyptian politician and diplomat was the sixth secretary-general of the United Nations, serving from January 1992 to December 1996. He led the UN during the period that saw genocide in Rwanda, civil war in Angola, the disintegration of the former Yugoslavia – all of this amidst increasingly stormy relations between the US and the UN.

Al Jazeera interviewed Boutros-Ghali, a Coptic Christian, in 2009, when he spoke in part on the Israeli-Palestinian conflict. In his farewell speech to the UN, Boutros-Ghali said he had thought when he took the post that the time was right for the UN to play an effective role in a world no longer divided into warring Cold War camps.  “But the middle years of this half decade were deeply troubled,” he said. “Disillusion set in.”