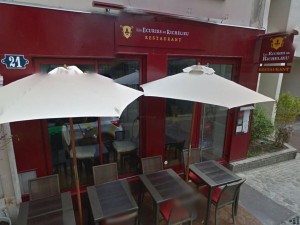 The owner of a Michelin-ranked gourmet restaurant has banned bankers after they refused to give him a loan.  Alexandre Callet, 30, who runs Les Ecuries de Richelieu in Paris, put up a sign warning: “Dogs welcome, bankers banned (unless they pay an entry fee of €70,000).” Keen to open a second restaurant, Mr Callet asked for a loan of €70,000 (£54,000), but numerous banking firms turned down his request.

“As soon as I see a banker that I recognise I won’t let them enter my restaurant,” he told The Local.  “They have treated me like a dog, so I have denied them access.”  He said he felt “humiliated” because the loan he asked for was was “nothing” considering his turnover for last year of €300,000. He added: “This is not just a kebab shop. My restaurant is in the Michelin guide and film stars come in here.

“A lot of bankers who turned me down know me. They come in here.”  This is not the first time the chef has had problems getting a loan.

When he tried to open his first restaurant, aged 23, he was turned down over 20 times before one bank agreed to lend him money.  “Restaurateurs, entrepreneurs, we are all in the same situation. Whenever we want to start a business, we have to get on all fours,”he told Le Figaro.  “I have never had financial problems and yet I find myself in this situation. Bankers are not doing their job.”