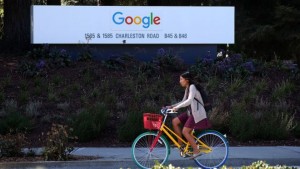 Alphabet- Google’s parent company- has surpassed Apple as the world’s most valuable company after its latest earnings report. The company made a profit of $4.9bn (£3.4bn) for the fourth quarter, an increase from $4.7bn a year ago. The announcement sent its share price up as much as 9% in after-hours trading. That means that Alphabet is now worth around $568bn, compared with Apple, which has a value of $535bn.

It is the first time that Alphabet has separated out the results of its Google business – which includes the search engine and YouTube – from its “Other Bets” business, which includes more experimental ventures such as self-driving cars and internet balloon programs. On an annual basis, Alphabet made $16.3bn but the figures show that the “Other Bets” business lost $3.6bn during the period, while Google’s operating income rose to $23.4bn, as online advertising increased.

“It looks like Google continues to execute on mobile [advertising],” said Neil Doshi managing director of research at Mizuho Securities. “Two or three years ago mobile was a big head wind for Google. There were concerns that it [had] a negative impact on its desktop business, but as mobile takes over for more searches, mobile ads are becoming closer in value to the desktop ads.”