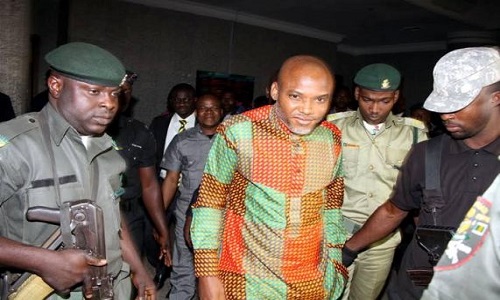 A group, the Labour, Health and Human Rights Development Centre, has cautioned the Federal Government against trying the leader of the Indigenous People of Biafra (IPOB), Nnamdi Kanu, in secret.

Mr. Kanu is being prosecuted by the Nigerian government for treason.

The group, quoting an online report, alleged that the Federal Government asked an Abuja Federal High Court to try Kanu and two other persons secretly but the matter was adjourned till February 19 for ruling on the application.

The statement reads: “Our attention has been drawn to the news that the Radio Biafra Director and leader of the Indigenous People of Biafra (IPOB) Nnamdi Kanu and two others, Benjamin Madubugwu and David Nwawuisi, facing charges of alleged treason, maintaining unlawful society, possession of firearms, among others, are to be tried secretly.

“These are activists campaigning for the self- determination of their indigenous people, which is lawful and enshrined in the African Charter on Human and Peoples Rights (Ratification and Enforcement Act) Article 20, which the Nigerian State is a signatory to.

“Secret trials under any guise are unacceptable; we condemn in strongest term and unequivocally, any attempt to try Nnamdi Kanu and co, or any other Nigerian for that in secrecy”.