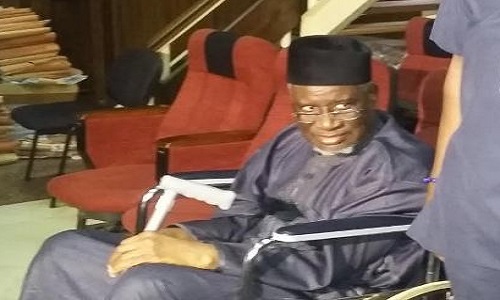 The Economic and Financial Crimes Commission, EFCC, has told a Federal High Court in Abuja that the office of the National Security Adviser, paid N300 million to Dr. Bello Haliru, a former national chairman of the Peoples Democratic Party, PDP.

Roukayya Ibrahim, a forensic specialist with the commission, made the statement while testifying before Justice John Tsoho on Tuesday.

Ms. Ibrahim said the outcome of a forensic analysis on financial transactions in the Sterling Bank account used indicated that the money was not payment for contract executed.

She said the office of the National Security Adviser headed by retired Col. Sambo Dasuki authorised the payment.

“The bank account that was used belonged to Abbah Bello, son of the third defendant (Haliru Bello)”, Ibrahim said.

She added: “Between October and November 2014, a special Task Force was created to investigate Defence and arms contract.

“Allegation of financial misappropriation in the office of the NSA has been reported at the commission.

“After the Task Force was constituted, we studied intelligence reports and commenced investigation.

“During the course of the investigation, we invited relevant government agencies and banks to discuss with them.

“Specifically, we spoke with senior staff from the office of the Accountant-General of the Federation and Central Bank of Nigeria.

“One of the discoveries was a letter from the Ministry of Finance to the CBN requesting the release of N100 billion on March 2, 2015.

“The money was actually meant for disbursement to agencies of government with the office of the NSA getting N30 billion out of the fund, supposedly to be used for security issues.

“On March 3, 2015, the Accountant-General of the Federation sent a memo to the Ministry of Finance in respect of the N30 billion.

“And on March 5, the Accountant-General of the Federation sent another memo to the CBN requesting urgent release of the N30 billion which was eventually paid into the NSA office account on March 11.

“On March 17, the N300 million was transferred from the N30 billion into the Sterling Bank account operated by BAM Project and Properties Ltd owned by Abba Bello.

“When Abba was arrested and interrogated, he denied knowledge of the transaction that ran through his bank account.

“Then his father, Haliru Bello, was away in abroad, but the story changed when we spoke with him on telephone.

“During the course of the investigation, we got to know that Bashir Yuguda, former minister of State for Finance, was used to actualise the transaction.

“During forensic analysis, we discovered that on March 18, disbursement of about N137 million was made to Kumugumu Ltd, on the same day, another N178 million was sent to North pole Ltd from the N300 million.

“On March 28, Abba transferred the sum of N163 million to Hijra Textiles Ltd on the instruction of his father, Haliru Bello.

“Abba who is the sole owner of BAM Project and Properties Ltd whose bank account is being used, withdrew the sum of N20 million in two tranches of N10 million each.

“Then on May 28, Abba made another transfer of N50 million into another of his personal savings account”.

Ms. Ibrahim said Abba had specifically confessed to the commission that BAM Project and Properties Ltd did not execute any contract for the office of the National Security Adviser.

The duo are standing trial for alleged unlawful collection of part of the funds meant for arms purchase for the military.

The judge adjourned the matter till Feb 23.