In an exclusive interview with Peter Okwoche of the BBC, President Muhammadu Buhari has disclosed that he is unable to prosecute the immediate past Minister of Petroleum Resources, Deizani Alison-Madueke and other petroleum workers over what he tagged lack of evidence. 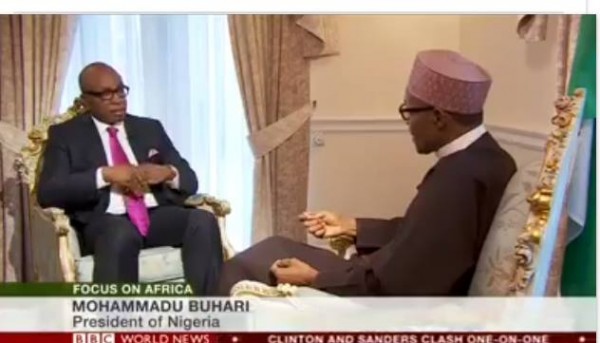 Peter Okwoche in a series of tweets quoted the President to have said, “To prosecute corruption successfully we need evidence. That’s not easy especially in petroleum sector.”

Buhari had threatened to prosecute all those who dipped their hand into the nation’s wealth for private use and among those brandished and suspected to be prosecuted is the immediate past petroleum Minister.

Buhari unwilling to give up on his search for evidence has unwittingly admitted that there was no form of evidence privy to his government against Mrs. Madueke and as such vindicated her from diverse alleged corrupt malpractices leveled against her by Nigerians.

On the report that she is seeking asylum in some foreign countries, in order to avoid been probed, Mrs. Madueke has reiterated in many fora that the consistent malicious and libelous attacks on her person was due to the reforms she brought to the oil and gas sector which was not favorable to some cabals in the country.

“Let me state it clearly for the records that Nigeria is my country and am not going anywhere. I love my country and I do think that I have done the best for my country.

“For everything that has a beginning there is an end and that is not a surprise. What is the surprise is the sort of malevolence bordering on personal malicious libel to my person during this period of time.

“I do believe that I have done the best for Nigeria in this job and I have attained many firsts in the history of oil and gas, especially in the reforms that we have done. In this period of time, I have stepped on many big toes, particularly the feet of the cabal in the industry when we came in.

“I have said severally that we will open up the industry to all Nigerians and we have, but that is not to the pleasure of certain cabal. And I have been continuously maligned because of this and we have taken millions and in fact, billions of dollars out of the hands of multinationals and their sub-contractors and put them in the hands of Nigerians through Nigerian content.

“Hundreds of thousands of Nigerians have come into the oil and gas industry because of our reforms.” She stated.