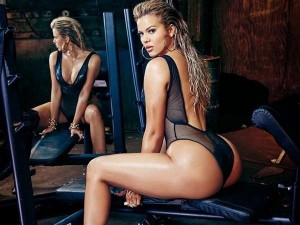 Famous TV reality star Khloe Kardashian in a video posted by her sister, Kourtney revealed she was only 15 years old when she lost her virginity.

Kourtney while playing a game called Know Thy Sister with Khloe asked her, ‘I think it was 15?’

Khloe confirmed the age, revealing she had written it on her whiteboard, but refused to give any further information.

The two then went on to reveal that Kourtney’s first kiss didn’t happen until she was a little older.

The reality queen recently got candid about life in the bedroom, revealing she likes when men talk dirty during sex.

“I believe in dirty talk. Communicating during sex is a Must, and I actually think it’s rude if you’re not vocal, LOL. If my guy isn’t vocal, I’m not excited,” she wrote on her website.