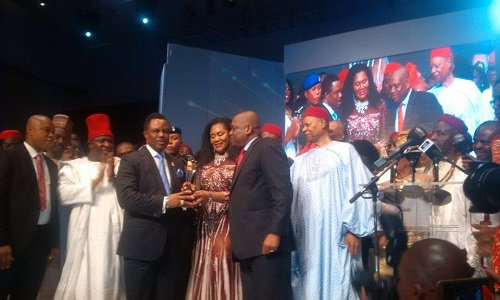 The Governor of Anambra State, Chief Willie Obiano, has lampooned his critics, who accused him of profligacy in the management of the state’s resources, reminding them that he was a wealthy man before he was called to serve his people.

Speaking at a media chat, which held at the Governor’s Lodge, Amawbia, weekend, Mr. Obiano said he did not become governor to loot the state’s treasury, as according to him, “there’s nothing here for me to steal”.

He said, “Look, let me tell you, I’m a wealthy person before I came here as a governor. I didn’t come here to steal, because there is nothing here for me to steal.

“I was enjoying my wealth in the United States of America with my family before I was approached to come and do this job as a governor.

“I had already made good money before venturing into politics. I was relishing in the comfort of my house, with swimming pool, basketball court and other good things in the United States before providence brought me here.

“I’m an accomplished person by every measurement. Providence brought me here as governor to serve the people.

“In terms of enjoyment, there is none here to enjoy as a governor, with all this protocol restricting my comfort”.

Obiano, who bagged The Sun newspaper’s Governor of the Year Award held in Lagos on Saturday, had received flaks over alleged mismanagement of the state’s resources, including the N75billion allegedly bequeathed to his administration by the immediate past Peter Obi government.

He, however, insisted during the media chat that because his banking background had enabled him to maintain financial prudence and transparency in the management of the state resources.

He also boasted of his administration’s achievement in security, describing it as outstanding just as he disclosed that Anambra State has now become an investment destination.

Governor Obiano also said he had built the longest bridge in the state to link Anambra with other states, noting that the bridge would shorten journeys to Nsukka, Abuja and so on.

He added that the three flyovers in Awka, the state capital, under construction, would be completed by April.