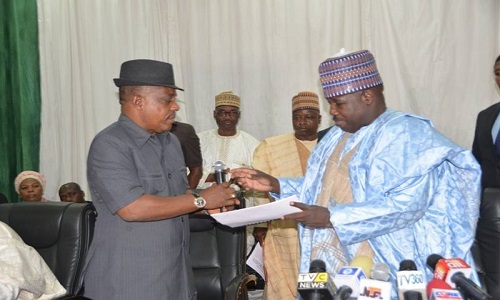 The embattled national chairman of the Peoples Democratic Party, PDP, Senator Ali Modu Sheriff, has dismissed calls for his resignation, saying he was chosen by the party leadership to rebuild and reposition the PDP.

Mr. Sheriff, who emerged the PDP national chairman last week, is facing stiff opposition from members of his party, some of whom have threatened to dump the party if the former Borno State governor does not resign.

Responding to the calls for his resignation, the party chairman, shortly after he formally took over from Prince Uche Secondus at the PDP national secretariat in Abuja on Monday, said “I won’t resign because the leadership of the party, in their wisdom, chose me to lead the PDP for the purpose of rebuilding and repositioning the party at this critical period”.

According to the former governor, his focus now is to ensure that the party was firmly put in the hands of the owners – the people at the grassroots, noting that the era of a few people dictating how the party should be run is over.

While acknowledging that the road ahead is uneasy, Mr. Sheriff promised that he would deploy all resources at his disposal to ensure that all members of the party especially founding fathers, are brought back to the fold to make the party great again.

“The time ahead is certainly not going to be easy. We are aware of the high expectations from Nigerians for us to give the part a new focus. Our party is a party that has an avalanche of qualified people who can proffer solution to our problems. We accepted to serve not because we are the best, but because we have been identified to be capable of doing the task ahead.

“I will carry everybody along. I have come to form a partnership with party men and women. The wrangling that is going on is normal but we will overcome.i will contact everybody that matters in the party because we have the same goal which is rebuilding the party to its enviable height”, he said.

Reacting to allegations that he is a sponsor of Boko Haram, Mr. Sheriff said “Boko Haram killed my own brother. They killed members of my family, so why should I sponsor people to kill my own brother, my own family. I am not a fanatic. I love to enjoy my life. Boko Haram are criminals who live in the bush and eat once a day. I believe their sponsors will be caught at the end of the day. I have nothing to do with Boko Haram”.

The chairman specifically mentioned a former Minister of Aviation, Chief Femi Fani-Kayode, who has been vocal in his allegations that he (Sheriff) is a Boko Haram sponsor, vowing that “this time around, people like Fani-Kayode will not go scot free”.