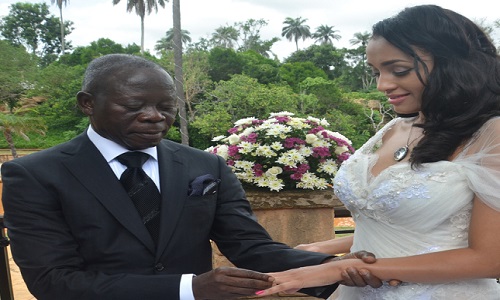 Wife of Edo State Governor, Iara Oshiomhole, has described as ‘most wicked and malicious’, rumors making the rounds, especially on social media that she filed for divorce from Governor Adams Oshiomhole.

Former Miss Iara Fortes, a Cape Verdean, got married to Oshiomhole, a widower, last year May at a private marriage registry at Iyamho, Etsako West LGA of Edo State.

Less than one year into the marriage, rumors surfaced online this week that Iara had filed for divorce from the governor on claims that he is fetish and diabolic.

She was also alleged to have accused her husband of being responsible for the death of his former wife, Mrs Clara Oshiomhle, who died in 2010, after a protracted battle with breast cancer.

Reacting to the unconfirmed reports, Iara said she is currently enjoying her marriage and that there was no reason to divorce her husband.

Iara said she was in her office throughout the week holding meetings and brainstorming on how to better the lots of the less-privileged Women and Children in the state through her pet project: “We Care Trust”.

Mrs. Oshiomhole added that she followed her husband on project inspection to the World-Class Central Hospital, Erosion Control sites, Road Construction sites as well as visited four Orphanage homes in Benin metropolis, in demonstration of her milk of kindness, drawing from the support of her husband.

According to the statement, “We Care Trust”, Mrs. Iara Oshiomhole’s pet project is embarking on training of Edo Youths under a programmed christened “Project Focus”.

“This is part of her efforts to uplift the socio-economic life of Edo people just as details of this event would soon be made public”, the statement said.

Mr. Mayaki, however, advised those he called rumor mongers “to engage in more productive engagements to deploy their energies rather than market inanities about public personalities all in their bid to sell their medium”.

“Which Court of Law was the alleged divorce initiated and to whom was it served? Which country, state, municipal or county, if any, is the Court situated? And when was the action/suit filed? Of course the writers didn’t bother to inform their readers. The truth however is that the answers only exist in the warped imagination of the purveyors of the lies”, he stated.