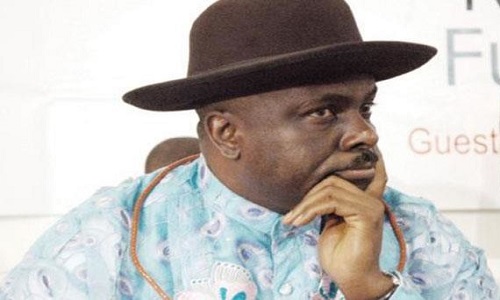 Contrary to widespread media reports on Wednesday that former Delta State governor, James Ibori, was  released from prison in the UK and subsequently re-arrested, his kinsman and Secretary-General, Oghara Clan Union in the UK, Mr Charles Abutoh, has said the convict is still serving his 13-years sentence.

Speaking with Daily Trust from London yesterday, Mr Abutoh said that Ibori was still serving his prison sentence at the Long Lartin Prison in Worcestershire, England, contrary to the reports that he was moved to a prison in Bedford pending his arraignment on another charge, which borders on the confiscation of his ill-gotten assets, estimated to be about 250 million pounds.

Describing the reports as “totally untrue”, Abutoh said logically, the former governor could not be released before the completion of his assets confiscation trial scheduled for June this year, and accused those peddling the rumours of mischief.

“If you imprison someone for stealing, you can’t let them go without telling you what you say they stole. That is the essence of the confiscation trial. Once the trial is concluded and he is able to settle it, he will be released.

“They know Ibori sells papers, so some people just sit down and write whatever they like”, he said, and explained that the former governor is due to be released this year but not before the completion of the confiscation case.

“I visited him in prison about three weeks ago and speak with him every other day”, he said, adding that “things are still as they are, and everything is on course”.