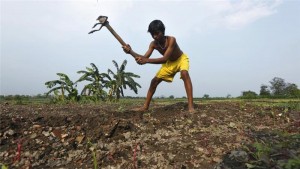 India has pledged billions of dollars to help improve the lives of farmers and boost the rural economy, as part of a “budget for the poor” unveiled on Monday. Arun Jaitley, the country’s finance minister, proposed spending nearly $13bn on rural development, promising higher incomes for farmers who form the majority of India’s 1.2 billion people.

The benefits for farmers could have been prompted by legislative assembly elections that are due in five states in the next few months. Presenting the annual budget for 2016-17, Jaitley forecast that India’s economy would grow by 7.6 percent in the year ending March 2016. The Indian government intends to distribute the benefits of growth among the poorer sections of society, including the vast majority of India’s farmers, he said.

“We plan to double farmers’ income in five years,” Jaitley said. “We have a shared responsibility to spend prudently and wisely for the people, especially for the poor and downtrodden.”

Jaitley outlined what he called the government’s “nine pillars” of a “transformative agenda” for the economy. They include measures to boost education, increase spending on roads, irrigation and other infrastructure, intensify oversight of government spending and reform India’s complicated tax regime.