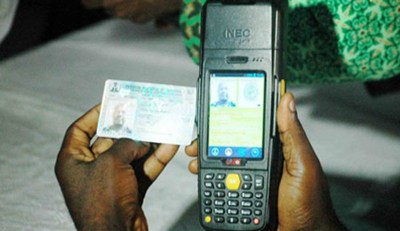 The Independent National Electoral Commission (INEC) has said card readers will be used in the forthcoming rerun elections in Rivers State.
The INEC Resident Electoral Commissioner (REC), Aniede Ikoiwak, made this known at a one-day interactive session with parties and stakeholders in Port Harcourt, the state capital yesterday.
The rerun elections for 32 legislative seats, cancelled by the Court of Appeal last December, are scheduled for March 19.
The REC said card reader was the major instrument recommended by electoral umpire for the accreditation of voters, adding that incident forms would complement the technology in special situations as approved by INEC.
Mr. Ikoiwak blamed the reported failure of card readers in the state on dubious people, who he accused of deliberately removing the batteries to enable them manipulate the election/results.
He, therefore, counselled the political parties to conduct themselves properly even as he lamented that rerun was only ordered in South-south states.
He also disclosed that INEC would work with the new modified system in which accreditation and voting would begin by 8 am and end by 2 pm.
Ikoiwak said: “We are going to use the card reader, the new modified system. The accreditation will commence by 8 am and end 2 pm. We have to be mature, in the Southwest, no rerun election was ordered.
“INEC came with incident forms to complement the card reader but some thought it was to circumvent the card reader. This is wrong, card reader is for peculiar situations where fingers were not authenticated”.
The REC noted that ad hoc workers for the election will be engaged in line with stipulated guidelines.
The APC and PDP senatorial candidates for Rivers East, Andrew Uchendu and George Sekibo respectively, who praised the REC for the session, called for a level-playing field for contestants, even as they expressed hope that in free and fair elections, losers should congratulate winners.
The Rivers PDP Chairman, Bro. Felix Obuah, assured INEC of the readiness of politicians to do the right thing, but challenged the electoral body on a smooth electoral process.