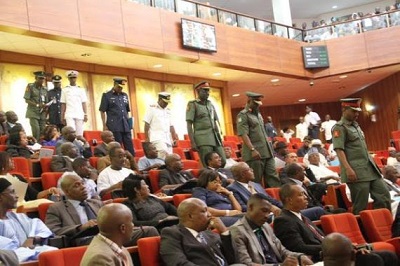 The Senate yesterday met behind closed doors with Service Chiefs, where they were briefed on the security situation in the country.

Chairman of the Committee on Defence, Ahmed Lawan, was absent.

Speaking to reporters shortly after the meeting, Ndume said: “We have been briefed properly but these are security issues; we cannot really disclose any of it.

“Unlike before, the Senate was not abreast or updated on the efforts they are making; now; we have very full, honest, open and transparent discussion on the activities.

“This is a security meeting that we just had; it will be wrong for me to disclose the details.

A source privy to the discussion between the Senate principal officers and service chiefs said the latter complained that their vote in the 2015 supplementary budget had not been released, thereby hampering their ability to fund their operations. The need to continuously increase service personnel and the hindrance posed by the slow procurement process.

The service chiefs, according to the source, stressed the need for the review of some laws governing their operations so as to make them able to respond to emergency situations in the Northeast.

Also discussed were the need for regional support for the fight against insurgency in the Northeast by the neighbouring countries, resettlement of Internally Displaced Persons (IDPs) in their traditional homes, intelligence gathering and sharing among the various agencies and mobilisation of the international community, particularly through inter-parliamentary efforts in support of the fight against terrorism in Nigeria.

In response to the concerns, the senators reportedly assured the military chiefs that they will fast track the request for the review of the laws being complained about by putting them on the “priority Bills” list.

They also promised to take up the release of funds with the Ministry of Finance immediately. The committees on Defence, Finance and Appropriations have been mandated to ensure that the issues raised by the Service Chiefs are taken care of in the budget.