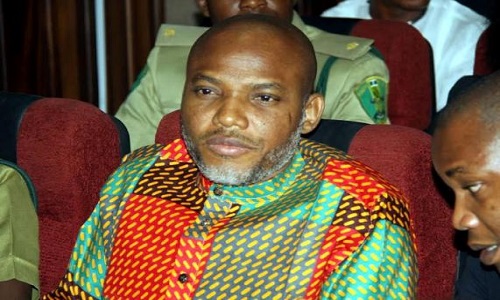 The Indigenous Peoples of Biafra (IPOB) has asked the Department of State Services (DSS) to release the personal effects of its detained leader, Mr. Nnamdi Kanu.

Mr. Kanu was arrested in October of 2015 in Lagos by the DSS and is currently standing trial on treason-related charges.

Irked by his continued detention despite court orders granting him bail, IPOB, in a statement issued on Thursday in Umuahia, the Abia State capital, expressed sadness over the refusal of the DSS to release Kanu’s personal effects to the family.

The group argued that since the DSS did not include those items as exhibits at the court, it ought to release them to Kanu’s family.

IPOB also accused the Federal Government of nursing ulterior motives by not “incidenting” the seized items as exhibits nor releasing them to Kanu’s family.

The group, therefore, called on the international community to note the continued maltreatment of Pro-Biafran agitators by the Nigerian authorities.