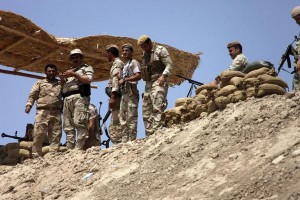 Life in Iraq under the Islamic State is hard, a 16-year-old Swedish girl who was rescued by Iraqi Kurds told an interviewer. The interview was seen Tuesday on Kurdistan 24, a broadcast news channel based in Erbil, Iraq, the headquarters of Kurdistan’s Region Security Council. Speaking in English, the teenager said she was 15 and pregnant when she dropped out of school and joined her radicalized boyfriend as they traveled by bus and train through Europe to Turkey, Syria and then Mosul, Iraq.

“First it was good together, but then he started to look at ISIS (IS) videos and speak about them and stuff like that. Then he said he wanted to go to ISIS and I said ‘OK, no problem’, because I did not know what ISIS meant or what Islam was, nothing.” She added they were living in a house provided to them by IS which lacked electricity and running water.

“In Sweden we have everything, and when I was there, I did not have anything. I did not have any money either. It was a really hard life. When I had a phone I started to contact my mum and I said ‘I want to go home,'” she said. He mother contacted Swedish officials, who notified Kurdish authorities, the Kurdistan Region Security Council, a military opponent of IS, said in a statement. Kurdish officials said Tuesday that the teenager was located in Iraqi Kurdistan andwould be given to Swedish authorities.

At the end of the interview, the girl thanked Kurdish officials for her rescue and for making it possible for her to see her family again and “have a happy life.”