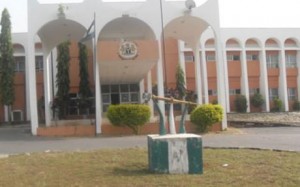 The leadership crisis rocking the Kogi State House of Assembly assumed a new twist on Thursday with allegations from the camp of the impeached Speaker, Momoh Jimoh Lawal that Governor Yahaya Bello was behind the shutdown of the House by unknown persons.
Lawal was reportedly impeached by five members of the Assembly on Tuesday.
The governor, however, washed his hands off the crisis rocking the Assembly.
The Special Adviser on Media and Strategy to the Governor, Abdulkarim Abdumalik, said Mr. Bello has no hand in the Assembly crisis.
He described as spurious, allegations by some legislators that the governor was the brain behind the leadership crisis in the state Assembly.
Abdulmalik said, “The crisis in the House of Assembly predates the present administration in the state. It would be recalled that before the advent of the present administration, the assembly crisis assumed a violent dimension when vehicles belonging to the different caucuses in the House were vandalized”.