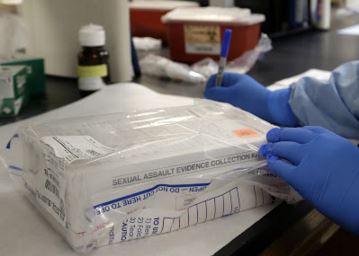 In line with the mandate of Governor Akinwunmi Ambode, the Lagos State Domestic and Sexual Violence Response Team (DSVRT) in partnership with the Ministry of Health and the Primary Health Care Board at the weekend launched the Sexual Assault Standing Order and Sexual Assault Evidence Examination Kit, also referred to as rape kits.

Coordinator of the DSVRT, Mrs. Titilola Vivour-Adeniyi said the launch was done at a training session for Health workers of Primary Health Care Centres.

She listed the five pilot centres to include Ogudu, Ita-elewa in Ikorodu, Ajilete in Ifako-Ijaiye, Palm Avenue in Mushin and Oshodi in Oshodi-Isolo.

She said the selection of the pilot PHC’s was methodically done as statistic reveals that sexual and gender based assault related crimes are most prevalent in these areas. These centres render 24 hours service, laboratory, HIV Counselling and Testing, and Maternal and Child Health Services.

According to her: “the Rape Kits contain the necessary instruments used for evidence gathering and examination some of which include microscope slides, saline water, swabs for collecting fluids from delicate body parts like the lips, cheeks, thighs, private parts.

“The Kit also includes materials for blood samples, comb, paper sheets for evidence collection such as clothing fibres and hairs, nail pick for scraping debris from beneath the nails, gloves. The documentation forms which include the consent form and Patient History/ Sexual Assault History are also in the rape kit.

Mrs. Vivour-Adeniyi said the Lagos State Sexual Assault Standing Order, the first of its kind in Nigeria, was produced to guide the provision of health care services as well as set the minimum acceptable standards for the provision of quality health care to the survivors of sexual assault.

She expressed optimism that The Standing Order will equip healthcare providers with tools to facilitate examination, treatment and management of sexual assault patients.

“The output of this training in terms of knowledge shared with the workers will ultimately facilitate examination and management of patients after sexual assault, and also improve the quality and documentation of evidence collection.

“The protocol response to be adopted is now clearly enumerated, some of which include taking the survivor/patient to a designated area, getting the informed consent of the survivor to have the examination, obtaining the medical history, and then proceeding to collect the different samples necessary for forensic examination and testing.
The Training was organised by the Lagos DSVRT with technical support from United Nations Programme on HIV and AIDS (UNAIDS), United Nations Population Fund (UNFPA) and FHI 360.