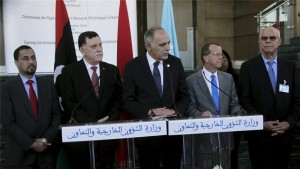 Libya’s UN-backed Presidential Council has announced the formation of a revised national unity government, with the internationally-recognised parliament to vote on the line-up early this week. One of the council’s members, Fathi al-Majbari, said in a televised statement late on Sunday that the list of 13 ministers and five ministers of state had been sent to Libya’s eastern parliament for approval.

Majbari, announced the list just before the deadline to reach an agreement expired. “We hope that this will be the beginning of the end of the conflict in Libya,” Majbari said from Skhirat, Morocco, where the council has been meeting to try to come up with a government. But in a sign of continuing divisions over how to bring together Libya’s warring factions, two of the council’s nine members refused for a second time to put their signatures to the proposed government, according to a document posted on the Presidential Council’s Facebook page.

The UN plan under which the unity government has been named was designed to help Libya stabilise and tackle a growing threat from the Islamic State of Iraq and the Levant (ISIL). It was signed in Morocco in December, but has been opposed by hard-liners on both sides from the start and suffered repeated delays.