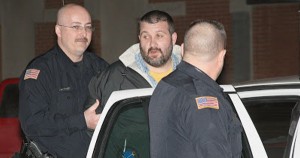 A security guard of the Smithsonian Museum of Natural History was arrested last Thursday, for allegedly having sex with one of the mummies of the Egyptian exhibition. 44-year old James Monroe, has worked as a night watchman for the reputed museum for the last nine years, and was almost considered a model employee until his divorce two years ago.

According to his colleagues, he suddenly became very depressed and short-tempered, and began behaving rather strangely. On two occasions, his superior even noticed that one of the mummies seemed to have been damaged during his watch, leading to the installation of some new video cameras.

The images captured by these cameras were far more disturbing than what his boss expected.
The cameras caught Mr. Monroe on Monday evening, opening the glass display case protecting the 2500-year old Egyptian mummy, lying down on top of it and sexually aggressing it. The Smithsonian fired the watchman and brought the images to the police, filing charges against their former employee for indecent exposure and destruction of property.

Mr Monroe will undergo a psychiatric assessment before the beginning of the court procedures, in order to determine if he is able to stand trial. This process should take a few weeks, meaning Mr Monroe will probably come back in court only in March.