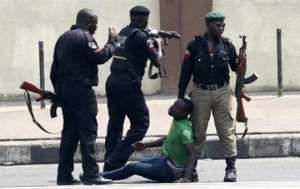 Kazeem Ariyo, 39, has been arrested and docked on Tuesday, February 23 after reportedly pouring strange water on a prophetess. The man was docked at an Osogbo magistrates’ court after committing the said offence on February 19 in Sabiatu street, Osogbo, the Osun state capital.

According to the Prosecutor, Sergeant Sunday Ajayi, the accused had a misunderstanding with the complainant and poured the strange liquid on her, a situation which caused uproar in the community. Ajayi noted further that Ariyo’s offence contravened section 249(d) of the Criminal Code cap34 Volume 11 laws of Osun, 2003.

After pleading not guilty to the count charge of breach of peace in a public place, Mrs Raji Balogun, the counsel to accused asked for bail in the most liberal terms for her client. Mr Olusola Aluko, who president over the matter, granted the accused bail in the sum of N50, 000 and a surety in like sum and adjourned the case to March 3 for hearing.