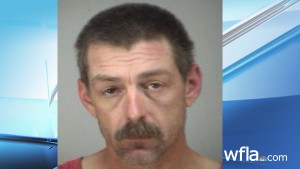 An argument over a sandwich led to a violent situation. Police said a man in Fruitland Park used his wife as a human mop to clean up the mess they made.  “He turned into a monster,” said the victim, who does not wish to be identified by WESH 2 News.  Keith Davidson, 46, was arrested Sunday in Fruitland Park for battery against his wife. Bruises were left on her arm. “When I went to go grab the peanut butter, I hit the cup of milk. The cup of milk fell on the floor,” the victim said.

The 911 call made from their home phone explains how they got there.  “Why is she hollering?”  “Yes, sir,” the dispatcher said. “Because you ripped my shirt off and threw me on the floor. That’s why I’m yelling,” the victim was heard saying on the 911 call. “To use me as a dish mop, it’s not the first, not the second, not the third time. But I can’t take no more,” the victim said. Police said Davidson used his wife’s head as a mop to clean up the spilled milk on the floor. It happened because of a dispute over a peanut butter and jelly sandwich, police said.

“She threw my peanut butter and jelly on the floor,” Davidson told a dispatcher. According to Carol Wick, CEO of Harbor House of Central Florida, food is often a factor in domestic violence. “Often times we find it’s around food. They use that as an excuse to then lash out at their partner,” Wick said. Davidson has since posted bond and was released from jail. WESH 2 News has learned he has been in trouble with the law in Lake County before. Jail records indicate he has faced charges for drugs and battery.

“You can love someone with all your heart, but if they’re not going to be a good person for you, in your life, then it’s time to just say goodbye. And it’s the hardest thing for me,” the victim said. The victim said Davidson is not welcome back at home. Davidson was released from jail on a $1,000 bond.