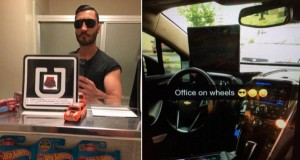 Uber driver Joseph Ziyaee is in the news for making a whopping $90,000 in only six months. That’s an unprecedented amount for Uber drivers, and virtually anyone driving a car for a living, no matter how hard they work. But here’s the shocking part – Ziyaee earned all that money through the popular service, but doing almost no driving at all! Ziyaee’s good fortune actually started with an injury – a hairline fracture on his foot made it impossible for him to drive a car multiple times every day. But that’s when he remembered a story he’d read about Blake Jareds, an Uber rider who earned $50,000 in credits through his referral code. And Ziyaee realised that he could probably succeed at making even more money than that using his own driver referral code.

So he decided to make the most of Uber’s policy of rewarding drivers for introducing new drivers to the system. If new drivers sign up using an current driver’s code and complete a certain number of rides, both employees get paid bonuses worth hundreds of dollars. So with his foot injury preventing him from driving, Ziyaee converted his taxi into an “office on wheels” to recruit new drivers. Ziyaee played the game wisely, learning from Jareds’s mistakes, like posting his referral code on Reddit – a move that got his account suspended. Instead, Ziyaee used his own powers of persuasion by directly approaching potential drivers. In the first month, he managed to make $20,000 even though he only did one ride. And so far, he has introduced 200 new drivers to Uber’s system.

Ziyaee’s trick is to find out what areas or cities could provide him access to the most valuable referral bonuses – the neighborhoods where drivers are most needed will offer higher rewards. So he combs through areas and when he finds one with a higher bonus than most, he physically drives there and tries contacting people. He’s driven out as far as San Diego and San Francisco, even though he’s based in LA. Once he meets someone who’s interested in signing up, he helps them with the entire process – right from filling out application forms to completing background checks. “That’s the most important part,” he explained. “You need to be willing to do follow-ups. You need to be able to help [potential drivers] if they hit obstacles.” Ziyaee is so involved in the process that he’s actually physically met every single person he’s signed on. In fact, many of them are now his friends.