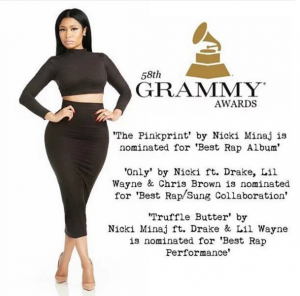 Famous American rapper, Nicki Minaj has revealed on her Instagram account that she would not be part of the performers at the 2016 Grammys, which holds at the Staples Center in Los Angeles today February 15, 2016.

Nicki who was already confirmed to take the stage, says she isn’t performing, but appreciates the Grammy’s for nominating The Pinkprint for the best rap album.

According to her, maybe next year she could put together a special performance.

“I know I’m in the commercial but I actually won’t be performing,” the singer wrote. “I want to thank the Grammys for being super sweet & supportive & for recognizing The Pinkprint. Maybe next year will make more sense in terms of timing and I’ll create a very special performance for you guys. In the mean time, enjoy the show!”

He wrote, “I am not performing at the Grammy Awards…but hey it’s the thought that counts.”