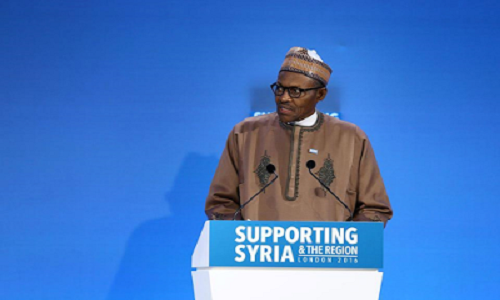 Nigerians seeking asylum in Europe are doing so purely for economic reasons, not because their lives are in danger as often claimed, President Muhammadu Buhari has said.

He, therefore, asked those keen on joining the train of migrants to Europe to desist as some Nigerians have already battered the country’s image through their criminal acts in their host countries.

Buhari spoke to The Telegraph of London during his visit to England as one of the world’s leaders to take part in the international conference on the Syrian crisis and the ongoing war on terror.

“Some Nigerians claim is that life is too difficult back home, but they have also made it difficult for Europeans and Americans to accept them because of the number of Nigerians in prisons all over the world accused of drug trafficking or human trafficking”, he was quoted as saying.

He added: “I don’t think Nigerians have anybody to blame. They can remain at home, where their services are required to rebuild the country”.

According to The Telegraph, only around one in ten of the 13,000 asylum claims lodged by Nigerians in Britain in the last 15 years have been accepted.

President Buhari opined that some Nigerians needed to improve their behavior, saying: “We have an image problem abroad and we are on our way to salvage that”.

He also expressed optimism that the UK would not relent in assisting Nigeria to apprehend Nigerians being sought by government for stealing public funds.

“The legal process in this country is slow, sometimes a little too slow for my liking”, he said of the process of apprehending those wanted on corruption charges and trying them. “But we still respect the system because we know it is thorough and fair”.