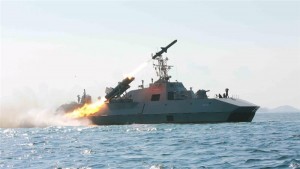 North Korea has fired several artillery rounds into the sea near a disputed maritime border with South Korea amid tensions between the two states over a nuclear test conducted by Pyongyang in January. The South Korean military on Saturday said the rounds had not crossed the border but caused alarm among residents on a nearby island in the South.

Last month North Korea carried out a nuclear test and in February it tested a long-range rocket, which were condemned by South Korea and the United States as grave violations of UN Security Council resolutions. The allies are expected to begin large-scale annual military drills in early March, which the North calls preparations for war and routinely vows retaliation over.

Saturday’s firing, heard from the island of Baengnyeong, was probably aimed in a northwestern direction from the North’s shore as part of an exercise, a South Korean defence ministry official said by telephone, asking not to be named.

The South’s office of the Joint Chiefs of Staff later said there were several rounds of artillery fire, revising a comment by the ministry official that there had been a single shot, and there were no other unusual movements by the North’s military.