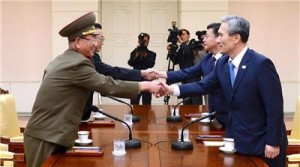 North Korea has expelled hundreds of South Korean workers from a jointly-run industrial park in response to Seoul’s decision to suspend operations at the complex over Pyongyang’s recent rocket launch. Pyongyang ordered a military takeover of the Kaesong zone on Thursday, freezing South Korean assets and pulling out tens of thousands of North Korean employees.

Seoul said its decision to suspend operations at Kaesong was an effort to stop from using hard currency earned from the park to pay for its nuclear and missile programmes.  North Korea tested what it said was a hydrogen bomb on January 6 and on Sunday launched a rocket, putting a satellite into orbit.

The United States, Japan and South Korea said Sunday’s launch was a ballistic missile test, and like last month’s nuclear test, a violation of UN resolutions. “I feel horrible. If it stops operating, companies like ours have to close business. It’s difficult,” said Yoon Sang-Eun, a driver, heading to South Korea.

“I feel sorry for the North Koreans, because they are way more worried than we are,” said another worker of the complex, Kim Soo-Hee, a nurse. Al Jazeera’s Harry Fawcett, reporting from the inter-Korean border, said that the response from North Korea on Thursday was expected but still came as a surprise as Pyongyang gave Seoul only half an hour to move the workers out of the complex with only personal belongings.