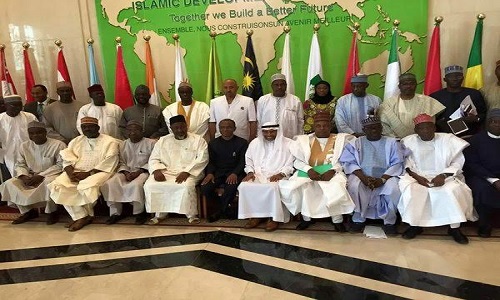 Former Vice Chancellor of the Ahmadu Bello University (A.B.U) Zaria and spokesperson of the Northern Elders Forum, Professor Ango Abdullahi, has called on northern states’ governors to explain to Nigerians the rationale behind their trip to Saudi Arabia to solicit for loans.
The Chairman, Northern States Governors Forum, NSGF, and Governor of Borno State, Kashim Shettima, last month reportedly led a high level delegation of five northern governors to the headquarters of the Islamic Development Bank in Jeddah, Saudi Arabia, to negotiate a multi-billion dollar loan.
The move was condemned by Chairman of the Senate Committee on Foreign and Domestic Debts, Senator Shehu Sani, who said the governors’ action was unconstitutional, as they lacked the powers to embark on external borrowing without passing through the federal government as encapsulated in the Debt Management Office Act 2003, Section 21 and External Borrowing Guidelines, 2008-2012, paragraph 2.1.
Speaking in Kaduna at the weekend, the NEF chieftain expressed concern about the size of the loan, which is yet to be disclosed, and the purpose of the loan.
According to Prof. Abdullahi, the governors “cannot borrow to go for party, they must let us know the quantum of this loan and what they’ll use the loan they’re getting for”.
The elder statesman continued: “There should be a part of the system that would allow the state governments to borrow money, but our trouble with borrowing is where they are going to put that borrowed money.
“Are they going to put that money in areas of production? The state governments should tell the country what these loans are in terms of quantum and what the loaned money are going to be used for.
“This is because, it is when they tell Nigerians the amount they are asking for and the reason why they are looking for the loans, that we would be able to make intelligent suggestions on whether the loans are worth going for or that Nigerians should reject it because it is an additional burden not only for now but for the future generation.
“So, while the governors should be allowed to look for loans in accordance with laid down procedure; they should be able to tell the Nigerian state what those loans are about in addition to the size of the loans”.
Mr. Abdullahi, however, agreed that the country is in difficult situation in virtually all the levels “from federal, states and down to the local government level. There is no question about the difficult situation”.
“The challenges ahead of the Nigerian state is how to increase avenue for revenue generation and the present administration has already indicated that it is high time Nigeria moved away from a mono-product economy, in this case to move away from oil dependence and diversify the economy into other areas such as agriculture and solid mineral resources”, he added.