Controversial Cool FM OAP, Freeze is known for constantly boasting on how everyone wears fake wrist watches, but him.
The outspoken radio personality recently went on Instagram to talk about his life, where he came from and how people should surround themselves with positive things in order to succeed in life.
Read what he wrote below: – 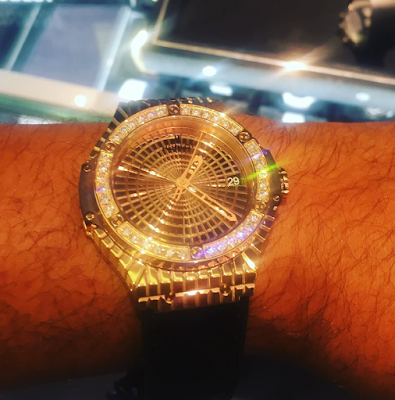 I Only do wealthy activities
The number one wealth killer is when a person of promise hangs out in places of poverty. Many times, people put themselves in poor places, which surrounds them with poor people. Get away from poor places if you want to avoid poor people. Dwelling along with poor people in poor places will never make you rich
When I was a teenager, I used to play basketball with negative people in negative places. I constantly witnessed smoking, cursing, and other disrespectful behaviors every moment of the game. Even though I didn’t partake in their antics, I was still a product of my environment, which deeply affected my general performance in life.
Many people tolerate negative conditions like this. They don’t realize how much the subtle influence of gossip, violence, and drama impacts them. Moreover, if you’re not on prosperity, you’re in poverty. Find out how you can partake in wealthy activities. For me, instead of playing basketball, I started visiting luxury homes, jewelry stores and car dealerships. It changed my life.