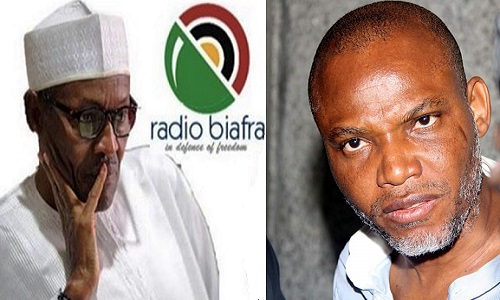 The apex Igbo socio-cultural organization, Ohanaeze Ndigbo, yesterday revealed that it had commenced talks with the Presidency in a bid to secure the release of the founder of Radio Biafra, Nnamdi Kanu, who has been in detention since October 14, 2015.
The organization also said its leadership will hold talks with notable traditional rulers across the country for the same purpose.
Mr. Kanu is presently standing trial on charges bordering on treason, brought against him by the federal government.
Although Ohanaeze did not divulge details of its discussions and the Presidency officials it has been holding talks with “for security reasons”, it noted that those consulted assured its representatives that something positive would come out of the consultations very soon.
The apex Igbo body told journalists in Abuja yesterday that discussions were already at advanced stage between its leaders and key personalities in the Presidency, adding that a political solution to the logjam is being explored to secure the release of Kanu.
National President of the youth wing of the Ohaneze Youth Council, Mazi Okechukwu Iziguzoro, who addressed the press briefing, disclosed that notable traditional rulers, like the Sultan of Sokoto, Ooni of Ife, Emir of Kano and the Shehu of Borno, had been consulted on the issue.
Iziguzoro noted that the Igbo leaders assured the Presidency and the royal fathers that they were prepared to prevail on Kanu to discontinue the operation of Radio Biafra if he is released.
The Ohaneze Ndigbo, he said, decided to initiate the ‘free Nnamdi Kanu’ campaign, as part of its peace in the Nigeria project.
He noted that it is their conviction that dialogue, instead of protests, remained the best option to resolve contending issues.
Iziguzoro added that the peace move initiated by the body yielded some fruits recently when the leadership of the Ohaneze Ndigbo addressed a joint news conference with the leadership of the Arewa Consultative Forum and demanded the unconditional release of Kanu, in the interest of peace and harmony.
He said, “For the past two months now, we have started to mediate with the Federal Government and other stakeholders in this country, with regards to what is happening to our zone. Ohaneze Ndigbo have also meet with the family of Nnamdi Kanu, his younger brother, Emma, his sisters and other members of the family and, we know their mindset.
“We are now convincing Kanu personally on the need to soften the stand of his movement. Before now, we had no access to him, but we can now have access to him through the Directorate of State Service and explain issues he needed to understand.
“If you are talking about Biafra, it is not only about one person. It is about the entire Igbo nation who have multi trillion dollars investment across the country. So everything has to be taken into consideration.
“The talks are still on and we met high profile personalities in government who would not want their names mentioned in the media without clearance. Two weeks ago, we were with the Sultan of Sokoto on the same issue. From there to the Shehu of Bornu, and then the Ooni of Ife.
“We as youth leaders of Ndigbo will be shirking in our responsibility and duty if we fail to state our position, opinion and suggestion on the way forward to this burning issue.
“In the first place we believe in a United Nigeria anchored on justice, equity and fairness. We believe that all problems and issues in Nigeria can be solved through dialogue and roundtable discussion”.
Isiguzoro expressed the hope that the peace initiative across the country by the apex Igbo group would go a long way to achieve the objective of freeing Kanu from detention.