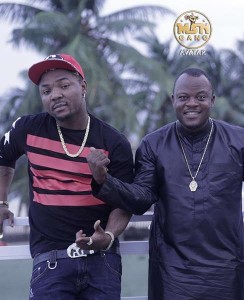 Days ago, INFORMATION NIGERIA reported that Oritsefemi was making plans to sue his former manager for using his ‘MSN’ logo without his permission.
Speaking further, Oritsefemi revealed that he’ll even arrest Danku and his mum over the 1 million naira they allegedly stole from him.
Danku has remained silent about the issue, but his mum has decided to speak up.
“My brother, God will bless you, I really don’t have much to say, but I remember when my son brought him to me and told me about him, the first day I saw him, my mind told me to tell my son to be careful. Oritsefemi is ungrateful, because my son was the one that helped him get the Avatar deal” she said.

“I remember clearly back then, Danku wanted to take my last son, Oluwaseun to meet the Avatar man in Abuja but I kicked against it because he was in final year in school, I didn’t want him to be distracted so I told him to take Oritsefemi and I was the one that gave them N10,000 to buy the clothes Oritsefemi wore to meet the man in Abuja, I never knew I shouldn’t have helped him” Danku’s mum further said.

“I have been doing my sand business since 2008, I only met Oritsefemi in 2014 so how can he say that. When they showed me his interview on paper last week, I was almost crying because this Oritsefemi boy is ungrateful when he wanted to rent a house for his mother around Magbon in Badagry he came to meet me to help him saying it was packaging, that her current residence in Kiri-kiri is not befitting, I gave them over #300,000 cash.”

“There was another time Danku brought him to me when they wanted to shoot the video for ‘Sexy Ladies’ with Davido, I gave him N1.2m cash till date he’s not returned the money. I am a landlady with two houses in Lagos so he can’t even compare me with his mum.“

She also said Oritsefemi did not sponsor the burial of her mother. “All these things he’s saying is a lie, I can say it in front of him and he can’t deny it. My mother died on April 12 and we buried her on May 30, but I almost cancelled the burial because my son had just left Oritsefemi’s house on May 16 and he fell terribly ill. Thank God for his life today, since then Oritsefemi has been threatening us, that’s why am shouting out now so Nigerians will know the type of person he is.“

In May 2015, Oritsefemi through his lawyers filed a petition stating that his then manager Danku had become a ‘threat to his life