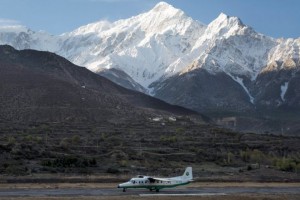 Rescuers in western Nepal have found the wreckage of a passenger plane which went missing with 23 people on board. The Twin Otter aircraft, operated by Tara Air, was traveling from Pokhara to Jomsom and lost contact with the control tower shortly after taking off.

Officials say the chances of finding survivors are slim. The plane was carrying three crew and 20 passengers, one of them Chinese and one Kuwaiti. Nepal’s aviation industry has a poor safety record. According to Sanjiv Gautam, director general of the Civil Aviation Authority of Nepal, the plane’s wreckage was found near the village of Dana in Myagdi district.

Earlier he told the BBC Nepali Service the aircraft lost contact with the control tower at Pokhara 10 minutes after take-off. The identities of those on board have yet to be released. Two of those on board were children.

Three helicopters were searching for the missing plane, Tara Air said earlier on its website, adding that “the weather at both origin and destination airports was favourable” for the 20-minute flight. Nepal’s army said, however, that fog had been hampering the search for the Twin Otter.