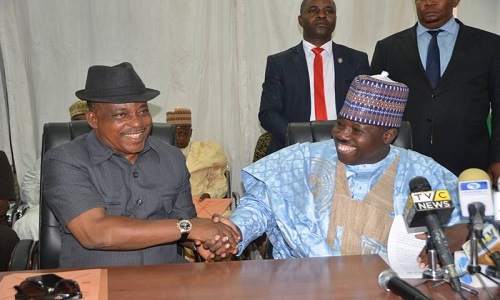 The dust raised over the appointment of Senator Ali Modu Sheriff as national chairman of the Peoples Democratic Party (PDP) is not about to settle, at least not anytime soon, as former ministers, who are still members of the party, insisted on his resignation.

The former ministers, who spoke under the aegis of ‘The Forum’, insisted that there was no new reason to make them change their demand for Sheriff’s resignation, even as they frowned at the threat issued by the national chairman to its member, one-time Aviation Minister, Chief Femi Fani-Kayode.

Chairman of The Forum, which comprises PDP ministers from 1999-2015, and one-time Minister of Special Duties, Alhaji Taminu Turaki (SAN), said “A threat to one is a threat to all”.

The Forum also kicked against the decision of key organs of the party to approve a three-month tenure for the embattled chairman.

The decision to give Sheriff a three-month tenure was reached after an enlarged meeting of the PDP Governors Forum, the Board of Trustees (BoT), the National Assembly Caucus, the National Working Committee (NWC) and state caucuses.

After the meeting, which held at the Ondo State Governor’s Lodge, Asokoro, the party leaders said the decision to allow Sheriff stay for three months was unanimous.

However, rising from a separate marathon meeting in Abuja yesterday, The Forum, which was informed of the party’s decision, expressed reservations.

According to the former ministers, the process that produced the chairman lacked legitimacy and transparency.

A communique signed by Turaki and secretary of The Forum, one-time Transport Minister, Ojo Maduekwe, urged the party to convene its national convention before the end of March.

“The forum rejects Alhaji Ali Modu Sheriff as National Chairman of the PDP due to the illegitimacy of the process that purportedly brought him in.

“The forum commends and supports the stand of the Board of Trustees of the Party for their rejection of the imposition of Alhaji Ali Modu Sheriff for lack of transparency and internal democracy in the process.

“The forum calls for the conduct of congresses at all levels of the party, leading to a National convention that should be held before the 28th of March, 2016 to return power to the people in tandem with the constitution of our Party and as encapsulated in our party’s motto: ‘Power to the People’.

“The forum condemns all acts of impunity in the running of the affairs of the party, at all levels and implores all members to respect the constitution of the party and that of the Federal Republic of Nigeria.

“The forum further resolves to continue consultations with relevant stakeholder groups with a view to solving the present challenges and strengthening our party.

“The forum noted with dismay the threat on one of its members, Chief Femi Fani Kayode, by Senator Ali Modu Sheriff. The forum considers a threat to one as a threat to all”.