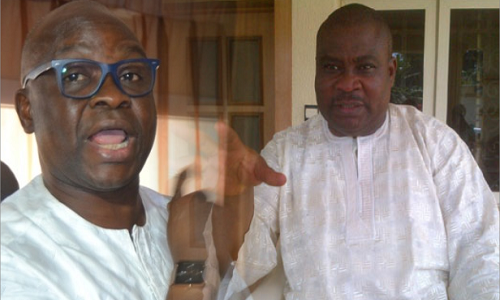 Governor Ayodele Fayose of Ekiti State has warned the All Progressives Congress-led federal government against shielding the former Secretary of the Peoples Democratic Party (PDP) in the state, Dr. Tope Aluko, from facing trial over allegation of perjury leveled against him by the state government.

Fayose said Aluko must be tried for perjury over his allegation that the June 21, 2014 governorship poll in the state, which he won, was rigged.

The former PDP scribe had over a week ago went on television to reveal how the former ruling party using the army and other security agencies, rigged the Ekiti governorship election.

Mr. Aluko also said what took place in Ekiti was a “coup, not an election”.

In a statement by his Chief Press Secretary, Mr. Idowu Adelusi, in Ado-Ekiti on Sunday, the governor gave the President Muhammadu Buhari-led government knocks over what he termed the use of an agency of government to shield someone that has breached the law of the land from prosecution.

He specifically warned the federal government against deploying the Department of State Services (DSS) to prevent another independent arm of government, the judiciary, from trying Aluko for perjury.

Fayose said the open confession, which countered what Aluko earlier said in court during the election petition tribunal, where he served as principal witness to the PDP, was enough to establish a case of perjury against him, having sworn on oath before giving testimony.

“To Aluko and his sponsors, he is a whistle-blower; one thing we are sure of is that the whistle will eventually explode on Aluko’s face as well as the faces of his sponsors.

“Aluko is the one who said he saw white and that the white has now turned black.

“Nigerians are demanding that he should be brought to the open to explain how what he said and maintained up to the Supreme Court level has changed.

“He testified under oath at the tribunal, Appeal Court and even the Supreme Court and he came out again to recant.

A vital arm of government, the judiciary, issued a valid order for his arrest and prosecution and that was widely publicised, but surprisingly, the federal government is using the DSS to frustrate that by pretending to be interrogating him and shielding him from facing trial.

“Democracy is hinged on separation of powers sand the rule of law so that nobody or arm of government would become the all-in-all. Those who are in authority now should know that others have been there before them and if their predecessors had turned everything upside down, what would they have met.

“If Aluko and his sponsors are sure of their allegations, let them release him for trial in the open court. The people of Ekiti State who voted overwhelmingly for Fayose and the PDP are ready to defend the mandate they freely gave.

“Every attempt they have made to rubbish the mandate have always failed including this Aluko plot and nobody should use an agent of government to cover the shame some people willingly brought on themselves by chasing shadows”, he said.

Governor Fayose therefore, demanded that Aluko be handed over to the police for prosecution for perjury in accordance with a valid and subsisting court order.