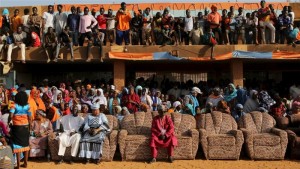 Voting has closed in the presidential and parliamentary elections in Niger amid tight security as President Mahamadou Issoufou, 63, who is seeking another term in office, promised a “knockout” blow to his opponents.

Al Jazeera’s Mohamed Vall, reporting from the capital Niamey, said most of the polling stations had closed and counting had started across the country as of 19:00 GMT on Sunday, with exceptions in areas where election materials arrived late.

In one voting station in Niamey, counting started under the dark because of lack of electricity, he said. A total of 7.5 million people were eligible to vote during at 25,000 polling stations across the impoverished country. Niger is endowed with abundance of minerals including uranium, the country’s leading export. It ranks fourth among global producers after Kazakhstan, Canada and Australia.

However, defence remains a top budget priority for the country on the edge of the Sahara Desert, with security a growing concern after attacks by armed groups from neighbouring Nigeria, Mali and Libya.