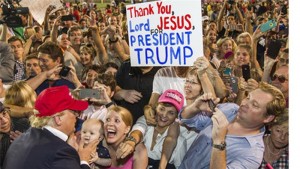 Donald Trump, a front-runner in the US presidential race, has said it is “disgraceful” of a religious leader to question his Christian faith after Pope Francis made the suggestion while criticising his anti-immigration stance. In a dialogue with reporters on Thursday on a flight to Vatican City at the end of a five-day visit to Mexico, Francis said, in a reference to Trump, that “a person who thinks only about building walls … and not building bridges, is not a Christian”.

Trump, who is the leading Republican candidate in national opinion polls, has been at the centre of a number of controversies, including one over his pledge to build a wall between the US and Mexico to keep out undocumented immigrants if elected president.  He has also announced plans to deport millions of undocumented immigrants. “Vote, don’t vote, I won’t meddle. But I simply say, if he says these things, this man is not a Christian,” Francis said in a response to a question about Trump’s anti-immigration stance.

In a statement posted on Facebook on Thursday, Trump said: “No leader, especially a religious leader, should have the right to question another man’s religion or faith. “I am proud to be a Christian and as president I will not allow Christianity to be consistently attacked and weakened.”

Trump also said that in the hypothetical case of an attack on the Vatican by the Islamic State of Iraq and the Levant (ISIL), the armed group which has seized territory in Iraq and Syria, Francis “would have only wished and prayed that Donald Trump would have been president”.