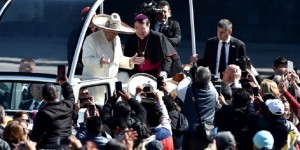 Pope Francis called on Mexico’s government on Saturday to fight endemic corruption and drug trafficking and he then prayed with thousands before the icon that unites the country – the Virgin of Guadalupe. Corruption is deeply ingrained in Mexico, and President Enrique Pena Nieto, his wife and finance minister have all been embroiled in conflict of interest scandals involving homes purchased from government contractors.

The pope also exhorted Mexico’s bishops to take a more active stand against the drug trade, which he said “devours like a metastasis.” Drug-trafficking gangs have infiltrated police forces across the country and more than 100,000 people have been killed in drug violence over the last decade. Some 26,000 are missing. “Experience teaches us that each time we seek the path of privilege or benefits for a few to the detriment of the good of all, sooner or later the life of society becomes a fertile soil for corruption, the drug trade, the exclusion of different cultures, violence and also human trafficking, kidnapping and death,” the pope said in a speech to Pena Nieto, government ministers and foreign diplomats.

He said Mexico’s leaders have a “particular duty” to move past corruption and violence and work for the collective good. The pope later celebrated mass at the vast Basilica of our Lady Of Guadalupe. Some 5,000 mostly well-heeled spectators gathered inside the church, while at least five times as many spectators gathered outside under the beating sun. Francis had said he yearned to visit the Basilica of Guadalupe, which attracts millions of pilgrims from all over Latin America, and to reflect silently in front of her image.

“‘Don’t be afraid,’ that is what she tells me,” the pope said ahead of his visit. While inside a small niche behind the altar to venerate the icon, he lost his balance and fell back into a chair, causing the crowd to gasp, although it did not seem serious. After praying for about 20 minutes, the 79-year-old pope, who suffers from sciatica in one leg, stood up and walked out.