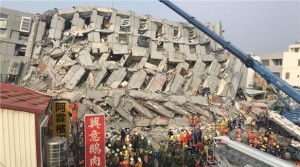 Rescue teams were racing to find survivors after a 6.4 magnitude earthquake hit southern Taiwan, killing at least seven people, injuring scores and trapping many under rubble. More than 1,200 firefighters scrambled with ladders, cranes and other equipment to the ruins of a 17-floor residential building in the city of Tainan that collapsed when the quake struck about 4am local time on Saturday.

The Tainan emergency response centre said a 10-day-old infant and a small child were among those killed in the disaster, which came two days ahead of Lunar New Year celebrations, a major public holiday.  Reporting from outside the collapsed Wei Guan residential complex in Tainan, Al Jazeera’s Rob McBride said survivors were still being pulled out 12 hours after the quake destroyed the building.

“The building is completely on its side, everything is down at ground level,” McBride said. “There are still finding survivors, the search and rescue operation is continuing,” he added. “There are teams crawling all over inside this main building – this is where most of the casualties it seems have occurred and most of the missing are still located –  moving through floor by floor, going inside the structure.”