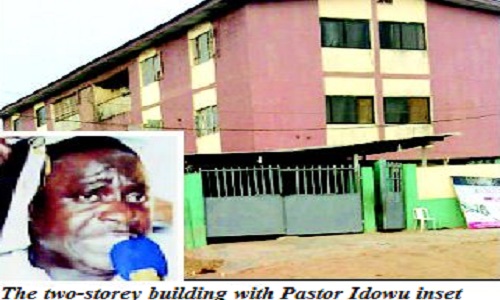 A ‘Prophet’, Oluwaseyi Idowu, has been arrested by policemen from the Oko-Oba Division in Ojokoro Local Council Development Area of Lagos State for allegedly impregnating two sisters.

Prophet Idowu, who is General Overseer of the Victorious Sacred Solemn Healing and Deliverance Ministry, also reportedly attempted to sell the impregnated sisters’ father’s two-story building without his consent.

The prophet, who was arrested at his church last Sunday by policemen, was invited to set up his church and manage a flat in the sisters’ father’s compound when he had accommodation problems in Agege.

Speaking to The Nation, a brother of the impregnated sisters said: “I and my brothers bought my father a two-storey building in Ogunsola close, Abule-Egba and at that time, Pastor Oluwaseyi had rent issues. My father allowed him to set up his church in his compound and also manage a flat. We never knew that was the beginning of our problems.

“The pastor held several vigils to create awareness and public attention. As time went on, he invited people to stay in the church and from the church they moved into the main house. Occupants left the house for the pastor’s people to move in and they lived there without paying a kobo.

“Months later, the pastor said he wanted to marry my 20-year-old sister, a virgin, who just graduated from secondary school. We never knew he had been sleeping with her for months before then. Recently, we found out that he also impregnated my 25-year-old sister who has been indoors for the past nine months”.

He said that their parents were not talking because the pastor’s congregation and family have taken over the building.

He added: “I called my elder brother who told me to report the case to the police. It was at the police station we found out that he intended to sell our building to build a new church elsewhere”.

Confirming the incident, an officer at Oko-Oba Police Station, who spoke on the condition of anonymity said: “This is not an issue of rape; the two impregnated sisters could have resisted or lodge a complaint against the pastor; it was when they got pregnant that a complaint was sent to us and we intervened. But even if Pastor Idowu is charged to court now; it’s useless because the girls were not raped. However, the neighbours and residents at Ogunsola Close are claiming the pastor used charm to sleep with them, and that is not an issue to be resolved in the court”.

Meanwhile, since news of the incident became public, members of Prophet Idowu’s church have left with a vow never to return.