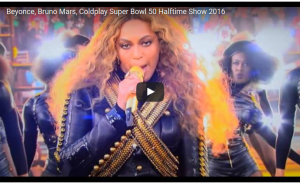 The superstar and her back-up dancers paid homage to the Black Panthers in order to bring attention to the Black Lives Matter movement during the halftime show on Sunday.

Not everyone was on board with Beyonce making such a political statement, especially as it came just days after she dropped the controversial video for the song.

And some are so unimpressed they are now even planning to stage a protest next Tuesday.

An unnamed organiser has launched an Eventbrite page for a demonstration, writing: “Are you offended as an American that Beyoncé pulled her race-baiting stunt at the [Super Bowl] Do you agree that it was a slap in the face to law enforcement”

“Do you agree that the Black Panthers was/is a hate group which should not be glorified … Let’s tell the NFL we don’t want hate speech & racism at the [Super Bowl] ever again!”

According to The Times newspaper, he said: “This is football, not Hollywood, and I thought it was really outrageous that she used it as a platform to attack police officers who are the people who protect her and protect us, and keep us alive.

One Twitter user blasted: “What is the NFL thinking when they permit Beyonce to sing some race baiting rant at Super Bowl 50”

A woman also wrote on Beyonce’s Facebook page: “As the wife of a police officer, I am offended by this entire video. Rise above and stay above the strife. For a girl who grew up in a privileged, wealthy family, she has no business pandering to those who didn’t.”

Meanwhile, others thought the performance for the Black Lives Matter Movement was incredible after the 34-year-old star was previously accused of shunning her black heritage.

Her new song is thought to be a rallying cry for the movement and Bey’s mum Tina Knowles also shared pics of her with the dancers giving the black power salute.

Other scenes show Bey in a flooded New Orleans, after George Bush was accused of ‘not caring about black people’ following Hurricane Katrina as he failed to get relief aid to people quick enough.