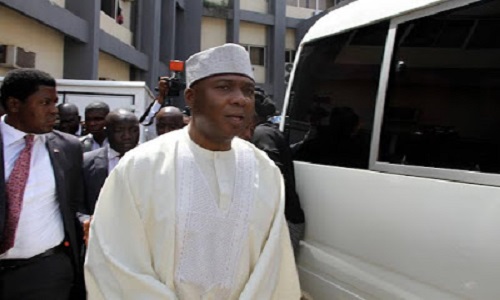 The resumption of the trial of Senate President Bukola Saraki by the Code of Conduct Tribunal has been fixed for March 10.

The spokesperson for the CCT, Ibrahim Alhassan, made this known on Friday.

He said the tribunal had issued and served notice of hearing on parties to the matter.

The office of the Attorney General of the Federation had dragged Mr. Saraki before the tribunal, slamming 13-count charge of false assets declaration, anticipatory declaration of assets and other charges on him while he was governor of Kwara State between 2003 and 2011.

The prosecutor said the offences violated Nigeria’s Code of Conduct for public officers.

Mr. Saraki, who has denied any wrongdoing, insisting the trial is politically-motivated, challenged the tribunal’s jurisdiction and constitution up to the Supreme Court, which struck out his appeal last Friday.

The notice of resumption of trial was, therefore, sequel to the Supreme Court ruling, which gave the CCT go-ahead.

The Minister of Justice and Attorney General of the Federation, Abubakar Malami (SAN), and lead prosecution counsel, Rotimi Jacobs (SAN), had asked the Tribunal to issue date for resumption of Mr. Saraki’s trial, following the Supreme apex court’s ruling.